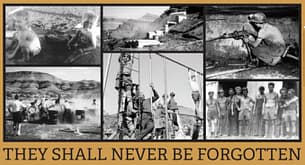 In 2018, the Asbestos Diseases Society of Australia unveiled a memorial plaque at Solidarity Park, West Perth. See video below. The plaque commemorates the 4,000+ West Aussies who have died from asbestos-related diseases and remembers those who were victims of Australia’s worst industrial disaster. The CSR Wittenoom Mine and Mill is the greatest example of workplace negligence in Australia, and second in the world to date.

Wittenoom was a blue asbestos mining town in the Pilbara region of Western Australia. Despite health warnings as early as 1948, it continued to operate until 1966, killing thousands of workers, their families and town visitors. One of those visitors was the Minister of the Crown Mr Ernie Bridge MLA, who died from mesothelioma, which he contracted during his time dealing with the town's closure. Today, we continue to lose many lives to the deadly asbestos dust from Wittenoom.

“Asbestos has been used in Western Australia since the 1920s, primarily in a building and manufacturing industries. In fact, in 1937 the late Mr Lang Hancock commenced blue asbestos surface mining and used mainly aboriginal people – the Banyjima people – at that mine. From 1943 to 1966 more than 20,000 people lived and worked at Wittenoom. The gorges had regular visitors and various school excursions were held. Notably, Hale School had its own allotted camping area. During that time, thousands of Western Australians attended and lived in that area. Apart from being mined, the asbestos fibre was shipped off with not a great amount of care. It was loaded onto and off ships, which exposed a lot of workers at port Samson and Fremantle port to asbestos fibres. Over the years many of those workers developed asbestos-related diseases.“ Hon Alison Xamon MLC, Parliamentary Speech 23/08/18

While we are very grateful for the CFMEU WA and Unions WA for allowing the memorial plaque in Solidarity Park, our members and friends from Wittenoom have requested a permanent memorial, not just for the workers but also for their children, families, visitors and local Traditional Owners of the land, many of whom have since lost their lives to deadly asbestos diseases. Wittenoom has been taken off the map and cannot be accessed by road; for many this creates a situation where there is not a place of memorial to grieve lost loved ones.

We have approached the State Government about the construction of permanent memorials in Perth and the Pilbara. We will also be visiting the Shire of Ashburton and the Traditional Owners of the land to discuss the best way forward in the Pilbara.

We are very fortunate that the artwork for the memorial sculptures has been donated, so we only need to cover the cost of the artist and materials, as well as an area for visitors to sit and reflect.

To learn more about the Wittenoom Tragedy, visit our YouTube channel.

We are proposing permanent memorials be erected in Perth and also in Karijini National Park, naming the thousands of workers, residents, traditional owners and their family members who have lost their lives to asbestos-related diseases. As the time between initial asbestos exposure and the onset of symptoms is usually 20 to 50 years, ADSA will also be allocating space on both memorials for the hundreds, even thousands, of victims that have yet to be diagnosed. To have a relative's name added to our permanent memorials in Perth and the Pilbara, please click here. 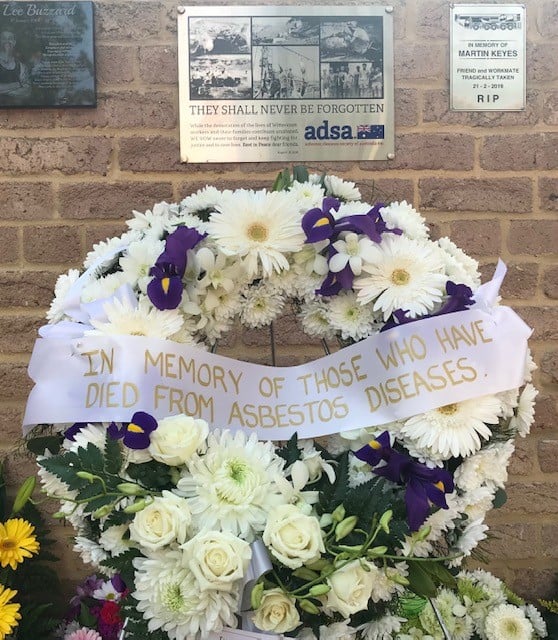 In 2018, the Asbestos Diseases Society of Australia and Unions WA unveiled a memorial plaque at Solidarity Park to commemorate the thousands of lives lost to asbestos-related diseases.